To what does the term ‘orthotics’ refer?

Orthotics refers to the application of external devices to a part of the body to either maintain or alter the position or a joint or body part. They are most commonly used to reduce pain and discomfort, improve mobility and function, and to reduce risk of further injury. There are a very wide variety of conditions that they may require the use of an orthosis and they can be fitted to almost any part of the body, from the feet all the way up to the face and head. You might require an orthosis if you have any of the following conditions: 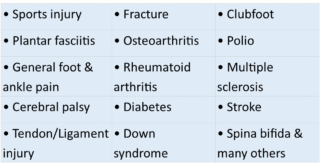 Depending on your needs you may be fitted with an orthosis that is custom made for you, or one that is produced to fit a range of people (your orthotist will discuss this with you in order to reach the best solution to meet your needs and lifestyle expectations). An orthotic device may also be called a brace or a splint, and there are many different types. Please follow the links for more information on each type of orthosis.

Transtibial, or below knee (BK), amputation is the most common level of amputation. A well-fitting socket allows for the pressures of walking to be spread over the entire surface of the residual limb so that high pressure is not felt on the sometimes sensitive, cut end of bone. The socket shape is captured using a plaster-of-Paris mould or a 3D scan of the residual limb. This shape is then enhanced by the prosthetist to maximise comfort and support.  The socket is usually fitted over a liner, either made from a firm foam or silicone rubber. The pylon connects the socket to the foot and makes up the height difference so that the person is balanced. Depending on the activity level of the user and their prosthetic goals there are thousands of prosthetic feet to choose from. ​

At APOS we pride ourselves on being an independently owned company. Allied to this comes the freedom to offer state-of-the-art, prosthetic technology from a variety of global manufacturers. Accordingly, your prosthetist will help you choose the best solution to assist you in meeting your lifestyle expectations.​

For more information or if you would like to book an appointment, please call us at 091 796983.

Transfemoral amputations (above-knee) occur at the knee joint or between the knee and hip (through the femur). A transfemoral prosthesis includes joints and pylons to mimic the thigh, calf, and joints in the knee, ankle, and foot.​

Similarly, with transtibial prostheses the socket shape is captured using a plaster-of-Paris mould or a 3D scan of the residual limb. This shape is then enhanced by the prosthetist to maximise comfort and support. ​

Your prosthetist will discuss weight bearing, suspension, foot, ankle and knee options with you to maximise your prosthetic rehabilitation. ​Please call us on 091 796983 for further information or to book an appointment.

With hip disarticulation or transpelvic amputation, your prosthetic leg will simulate the hip, knee and ankle joints. While these prostheses generally take longer to get used to, our internationally trained prosthetists will work with you to help you successfully wear your prosthesis throughout your daily life.

For more information or if you would like to book an appointment, please call us at 091 796983.

A partial foot amputation can be anything from a single toe to the entire foot forward of the heel.  There are a number of distinct surgical techniques for certain levels, such as Lisfranc, Chopart and Pirogov (each named for the surgeon who invented them).  Another common amputation is a ray amputation, where one or a number of toes are removed along with the corresponding metatarsal bone.

The majority of partial foot amputees are able to bear weight on their foot and walk without a prosthesis, but they may find walking difficult or painful.  The prosthesis required will vary depending on the level of amputation, and may consist of a moulded insole, a silicone prosthesis that encloses the ankle, or a rigid plastic prosthesis that comes up as far as the knee.  Generally speaking, the more of the foot that is lost, the larger and stronger the prosthesis needs to be to support the body and allow for a natural gait.

The ankle disarticulation, commonly known as a Symes amputation (again after the surgeon who invented the technique), is similar to a partial foot amputation but with the heel bone also removed.  As the shin bones are not cut it is often possible to bear some weight through the residual limb, but a person may only be able to take a few steps and only on soft grass or carpet.  Their gait will be very unnatural due to the shortening of the leg.  A Symes prosthesis has a prosthetic foot that provides stability and leverage for walking, and a socket that encloses the entire lower leg; some weight can be taken through the end of the residual limb but some must be taken through the socket below the knee cap.

Prosthetic solutions for upper-limb amputations answer a very different challenge. The function of the human hand is harder to replicate in comparison to a foot or knee. Advances in technology have brought the introduction of myoelectric prostheses but often a person may simply wish to have a prosthetic arm that is cosmetically appealing, allows them to maintain a symmetrical body image, helps their balance and does not draw attention to their limb absence. There are also a wide variety of functional devices that can be used in place of a hand – such as a hook, tool holder, knife or steering wheel attachment. While they may look unusual, many people find the added function invaluable when performing certain tasks.​

Meet the ‘Hero Arm’ by

The ‘Hero Arm,’ a lightweight, innovative and practical, prosthetic solution, is now available in Ireland through APOS. Call 091 796983 for more information or to make an appointment with a member of the APOS clinical prosthetics team.

We can also provide prostheses for specific activities such as sport or hobbies. For lower-limb amputees we offer running prostheses with ‘blade’ feet, limbs that are water-resistant for use in the shower, getting around at a swimming pool or walking on the beach, and limbs for cycling, skiing and more. For upper limb prostheses we have made bespoke terminal devices for anything from holding cutlery to holding the bow for a violin.

Call  091 796983 for further information or to meet with a member of the APOS clinical prosthetics team. ​

APOS provides an extensive range of microprocessor prosthetics to restore functional independence and restore mobility. Microprocessors can be used in both upper and lower limb prosthetic solutions .Our experienced and registered clinicians have great expertise in sourcing the optimum prosthetic solution based solely on your own individual case, clinical needs and lifestyle expectations.

We work with all the ‘industry leaders’ in assisting our clients achieve greater functional independence and mobility. As Ireland’s largest independent provider of prosthetics we can offer all our clients the widest range of solutions available on the international market. Our clinicians will assess and measure you for your device here in Ireland negating the need and cost of traveling abroad to other centres such as the U.S., U.K., Germany or other E.U. member states.

APOS Ltd is an Irish owned, specialist clinical, prosthetics and orthotics provider. We are involved in gait analysis and the manufacture and fitting of specific prosthetic and orthotic devices to clients with a wide range of pathologies.

We pride ourselves on our innovative and creative design and we strive to provide the highest quality services for our patients.